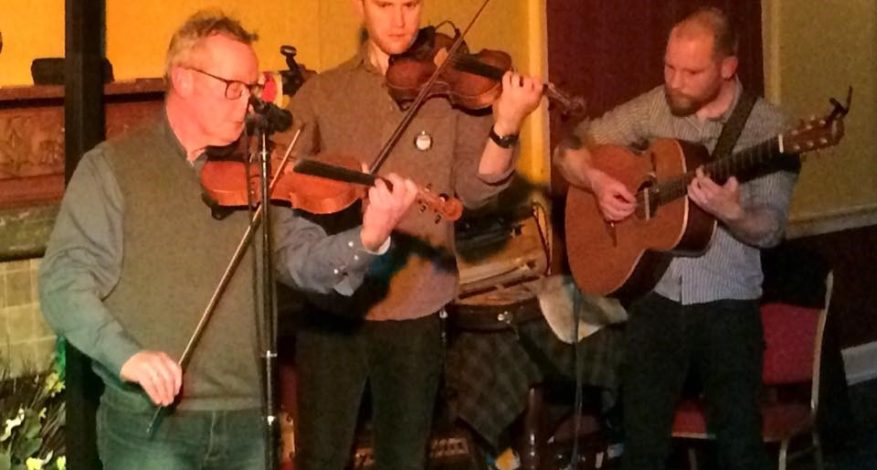 The musical activities in Dunkeld and Birnam, sponsored by the GDMT, were a great success.  Andrew Finn Magill and Seán Gray performed for a whole school assembly at the Royal School of Dunkeld on their Founder’s Day.  They got a rapturous welcome from the children and the Trust was thanked publicly by Julie Menzies, the Headteacher, who also gratefully acknowledged the support provided by the GDMT for music in the school last year.  At Rivendell Care Home, residents and carers all loved the music. When I mentioned the Trust, one of the residents who hadn’t said anything up to that point, remarked “oh he was a great piper from Pitlochry.” Lovely! Tea and home-made cake were gratefully received by the musicians!

At the evening concert in the Royal Dunkeld Hotel, Finn and Seán were joined by Dave Amos, Jamie Jauncey and Pete Clark. Fiddler Andrew Finn Magill and Sean Gráy (guitar, flute) presented a special concert to celebrate transatlantic musical connections. The Trust was thanked during welcoming and closing remarks. I had two GDMT t-shirts left which I presented to the lads.

Thank you again for supporting this initiative to take traditional music into the heart of the community, especially to those who aren’t often able to attend concerts.  I can assure you that there is a great deal of appreciation for the GDMT in Dunkeld and Birnam.