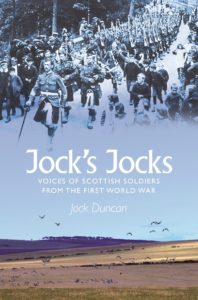 Jock’s Jocks is a project which is based on an extensive collection of First World War memories collected by Gordon Duncan’s father, Jock Duncan, in rural lowland Scotland, primarily in the north east. Collected between the 1930s and 1980s, Jock spent many thousands of hours transcribing these testimonies of 59 veterans, taking great care to capture the nuances of their native north east Scots tongue. The Jock’s Jocks project has been led by GDMT Trustee Gary West, who edited the collection for publication, and who wrote a one act musical play based on the material, with a cast of Scott Gardiner, Chris Wright, Charlie West and Gary himself.

The book was jointly published by the EERC at the University of Edinburgh and the National Museums of Scotland in April 2019, and has been described as being ‘of national significance’.  It is available for purchase in our online shop.

The play has been performed in various locations throughout Scotland.  An audio only version of the play is now available on Soundcloud.

And now, a Scots radio programme about Jock’s Jocks has also been nominated for an award at the Celtic Festival in France. Frieda Morrison, the director of Scots Radio and organiser of the Doric Film Competition, said yesterday she was delighted at the recognition for the documentary, which highlights the scale of the work carried out by Mr Duncan.  She said: “It was an international judging panel and they have picked ‘Jock’s Jocks’ to be in contention for an excellence award in Brittany in June.  The programme will be up against the big companies like the BBC and RTE and competition from all round the world. Jock Duncan has done an immense power of great work to speak to so many of the soldiers who were involved in the First World War and his efforts deserve to be brought to as wide an audience as possible.  Gary West has since written an excellent play about the whole story and Scots Radio was privileged to be involved in making a programme about the project.”

Jock Duncan himself enjoyed a successful career as a traditional singer of note, and has been admitted to the Scottish Traditional Music Hall of fame, along with his sons, Pipe Major Ian Duncan and the late Gordon Duncan.