None of this would have been possible without the help and support from The Gordon Duncan Memorial Trust to whom we are extremely grateful. 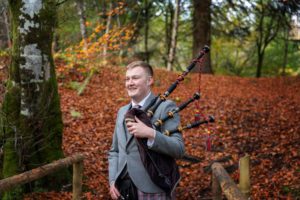 The Gordon Duncan Memorial Trust made an award to me in March 2020, just before the lockdown, and it covered all my travel costs for a number of months while I was moving back home to Skye from Glasgow to complete my HNC (Traditional music performance) online, which I’m very grateful for. Although the lockdown put a halt on live music I was able to purchase recording equipment, with help from the GDMT, so I could remotely collaborate with friends. With the GDMT funding I was able to pay for online tuition prior to my successful audition for the Royal Conservatoire of Scotland’s Undergraduate piping course in December 2020. I’m very grateful to be continuing on a musical path and I’m really looking forward to starting in September 2021.

One of the biggest losses of the long Covid lockdown has been not being able to play music with the Fiddle Group. Enthusiasm for Zoom sessions began to drop and the ceilidh band was unable to practice until we found a way of playing online without the usual problem of sound latency. We now use a platform called JamKazam. The GDMT helped meet the cost of the audio equipment for the younger players and we now have weekly ceilidh band practices.

Here is what some of the band members have said:

Our ceilidh band relies on young people passing on their experience and the tunes to the next generation. The virtual band practice sessions have brought back that continuity and have protected the long chain of experience which goes back 25 years in the group. None of us can wait to play live together again but for now this is a great substitute. 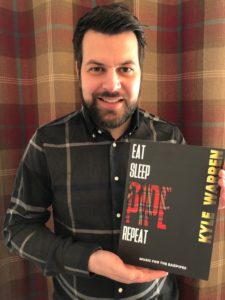 I am hugely grateful to the GDMT for their funding support.

Beyond the financial support awarded towards my project, there was real interest and encouragement from the trust in my desire to publish a second collection of bagpipe music. This gave me much confidence in the project, and a real boost to get stuck in to all that self-publishing a tune book entails.

I am pleased to say my book, EAT SLEEP PIPE REPEAT has been very well received since its launch. I hope in the years to come many tunes from the book will have found their way into pipers and musicians hands, further adding to the array of Scottish music, both traditional and modern, that so many people enjoy.

For all the fantastic work the trust does, in the name of such an influential figure to the whole Scottish music scene and beyond, I hope my project did the trust’s fantastic work justice.

Thank you everyone at the GDMT!

I would like to provide you with some feedback on the year 2020 and how the award from ‘The Gordon Duncan Memorial Trust’, has helped me and made a difference in advancing my piping career.

The year 2020 was not what I was hoping for in piping. I think everyone’s plans became scuppered. Although, my year still managed to be eventful and successful, it was different from the last few years, and I had to become much more adaptable. For example, with Zoom lessons and online piping competitions. Furthermore, I was fortunate enough to become ‘The under 18 yrs, overall champion’ in the annual ‘Shotts Piping Competition‘ and the ‘South West Scotland‘ annual piping competition. I also played some choices of my own compositions in these competitions which I wrote in 2020. In addition to this I have had four of my tunes published in a special feature as ‘Piper of the Moment’ by ‘Modern Piping Magazine’ Lincoln Hilton.

I also had the opportunity to play my pipes for my local community, old folks homes, raising funds for charity and for the NHS at appropriate times.

Finally, with all my efforts, study and support from, ‘The Gordon Duncan Memorial Trust’ I have been offered a place on the four years honours course in bagpipes at the ‘Royal Conservatoire of Scotland’ in Glasgow 2021.

Yours with great thanks,
Bobby Allen