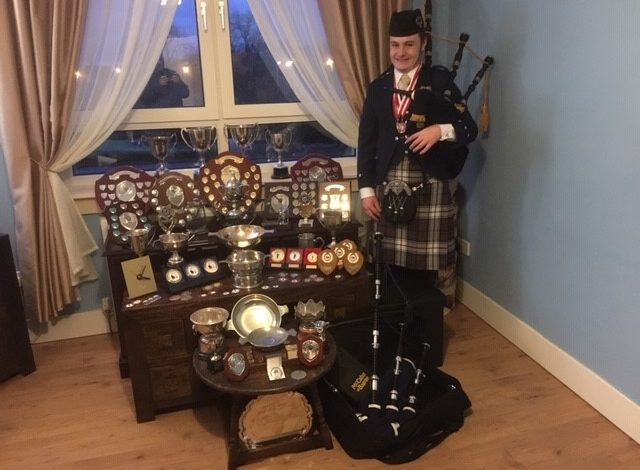 This year 2018 has been a wonderful year regarding piping and my attainment in exams and performance.  From my familiar surroundings in ‘North Lanarkshire’ I have travelled all over Scotland, north, south, east & west, even as far as the ‘Outer Hebrides’ & London.  I have had a very successful year in competing UK wide, also in international competitions at the highest level in piping, winning over thirty events.

‘The Gordon Duncan Memorial Trust’ has contributed towards my success, attainment and experiences in piping in 2018.  With the grant I received from them, this provided me with a positive foundation towards my achievements and achieving my goals as a composer and piping teacher.

I have met Prince Charles twice, firstly, at Buckingham Palace where I played at his seventieth birthday party with ‘the Scottish National Youth Pipe Band’, and secondly at ‘The Braemar Gathering’ along with ‘HM the Queen’ who presented me with the winner’s medal, in the under 18 international piping competition. I have also claimed my own new record in winning twelve different highland games in a row, along with many other titles.  On the pipe band front I have been a member of ‘The Island of Islay Pipe Band’ (grade two).  Late on this year, I was approached and asked if I would consider to join the famous, Shotts & Dykehead Caledonia, Pipe Band (grade one).  I have now taken up this opportunity and am currently a piper with this famous pipe band.

Finally, in conjunction with all this experience and success gained, I have completed and passed my piping exams at SQA National Five.  I am currently working towards my achievement at SQA National six at the college of piping in Glasgow, prior to gaining my teachers certificate.

Looking forward to another great year in 2019.